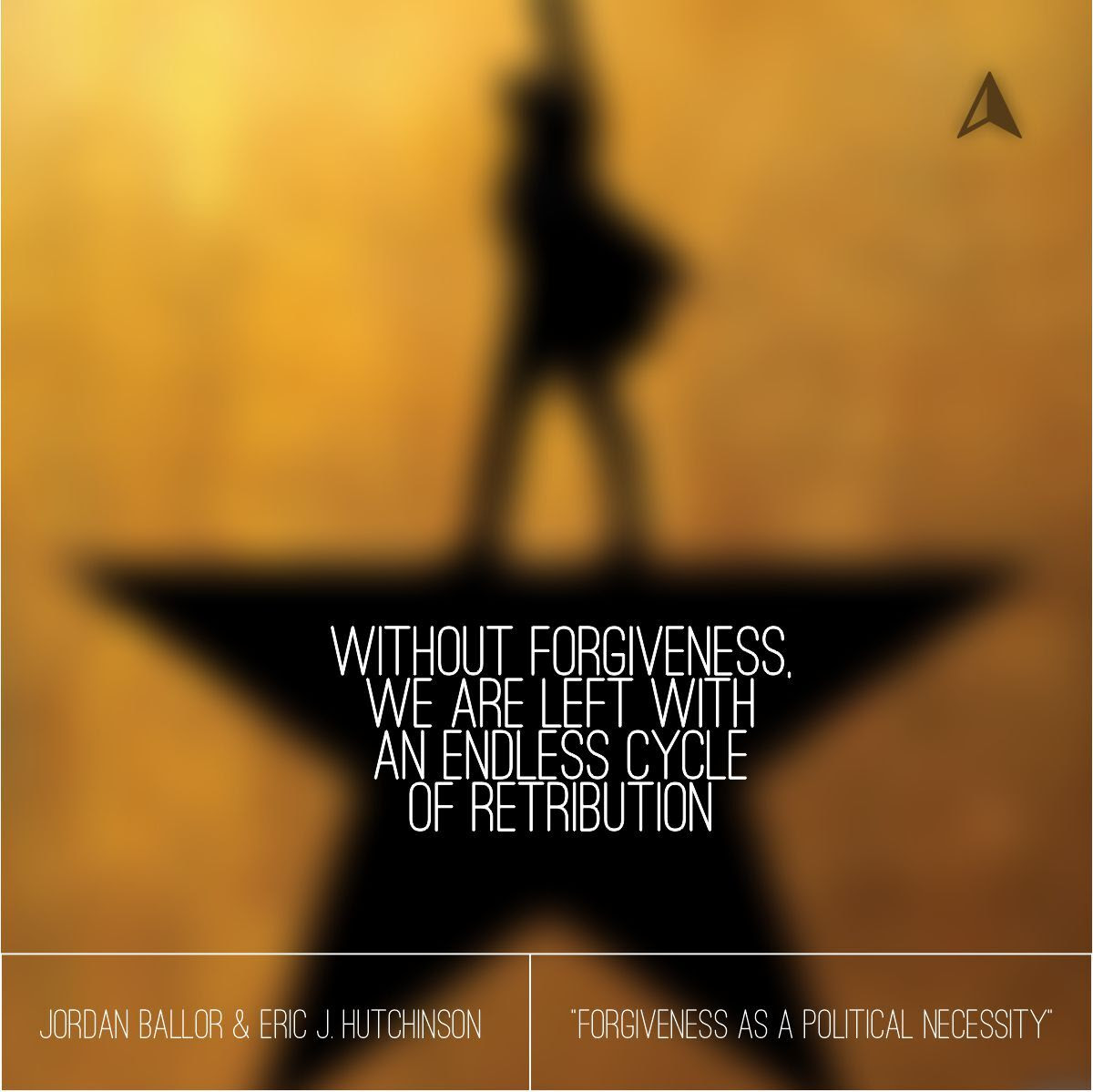 Note: This week we have a guest contributor, C.J. Green, who writes for Mockingbird. In reality, he synthesizes several contributors here, and I congratulate you for not getting mixed up: Jordan Ballor and Eric J. Hutchinson (essay: “Forgiveness as a Political Necessity”) and, depending on your bent, the famous/infamous Hannah Arendt. –Timothy Lien

For years I counted myself “above it all.” Never listened to the soundtrack. Never really wanted to. But when it became available on Disney+, at last I  tuned in, albeit suspiciously. Reader, Hamilton is good. How good, the playwrights can debate. But there’s no question of the talent, creativity, and ultimate message of redemption and life. Even so, in 2020, it has been “canceled” — at least, many have wanted it canceled, for glorifying the slave-owning protagonists. (People are still tuning in.) Recently the issue was taken up by Jordan Ballor and Eric J. Hutchinson, in their essay “Forgiveness as a Political Necessity.”

Near the opening of the show, a young Alexander Hamilton reflects on the prospects for the movement for independence. War, it seems, is a necessity; the revolution is coming and Hamilton is committed to fighting for it. But, he wonders, “If we win our independence, is that a guarantee of freedom for our descendants? Or will the blood we shed begin an endless cycle of vengeance and death with no defendants?”

In these brief lines Hamilton captures the two possible futures for America, one leading to life and the other leading to death. In recognizing these possibilities Hamilton shows himself to be a prescient student of history and the consequences of revolution. The dominant image called to mind by the word “revolution” is that of a wheel (from revolvere, “to revolve”) so that as the wheel turns, the cycle progresses. Those who were on the bottom end up on top and those who were on top are laid low — until the next turning of the wheel.

Here the question is not whether criticisms of the show are valid (for what it’s worth, Miranda has said that they are). The question is whether there is room in our culture, at some point, for the show’s central idea: “Forgiveness ... can you imagine?”

Ballor and Hutchinson continue that forgiveness is not just a religious imperative, coming down to us from on high. Citing Hannah Arendt, they argue that even from a secular perspective, forgiveness is what makes society livable.

From Ballor and Hutchinson’s essay:Without forgiveness, we are left with an endless cycle of retribution that comes (and come it does) for everyone sooner or later.

By denying the past qua past, mere retribution destroys the present as well. Arendt puts it this way: “Without being forgiven, released from the consequences of what we have done, our capacity to act would, as it were, be confined to one single deed from which we could never recover; we would remain the victims of its consequences forever, not unlike the sorcerer’s apprentice who lacked the magic formula to break the spell.”

Arendt expands on this idea later. “Forgiveness,” she says, “is the exact opposite of vengeance.” Why? Because forgiving:

is the only reaction which does not merely re-act but acts anew and unexpectedly, unconditioned by the act which provoked it and therefore freeing from its consequences both the one who forgives and the one who is forgiven. The freedom contained in Jesus’ teachings of forgiveness is the freedom from vengeance, which encloses both doer and sufferer in the relentless automatism of the action process, which by itself need never come to an end.

Nothing is more purely reactionary than vengeance. Forgiveness, on the other hand, is the only reaction that is also a new action; it makes an end so that it can make a beginning. If vengeance lives only in the past, replaying the original offense on an endless and obsessive loop in the manner of Groundhog Day, forgiveness has the uncanny ability of effecting a genuine and surprising scene-change. The director’s “Cut!” is not a call for violence, but rather an opportunity for a second act. So, too, is forgiveness.