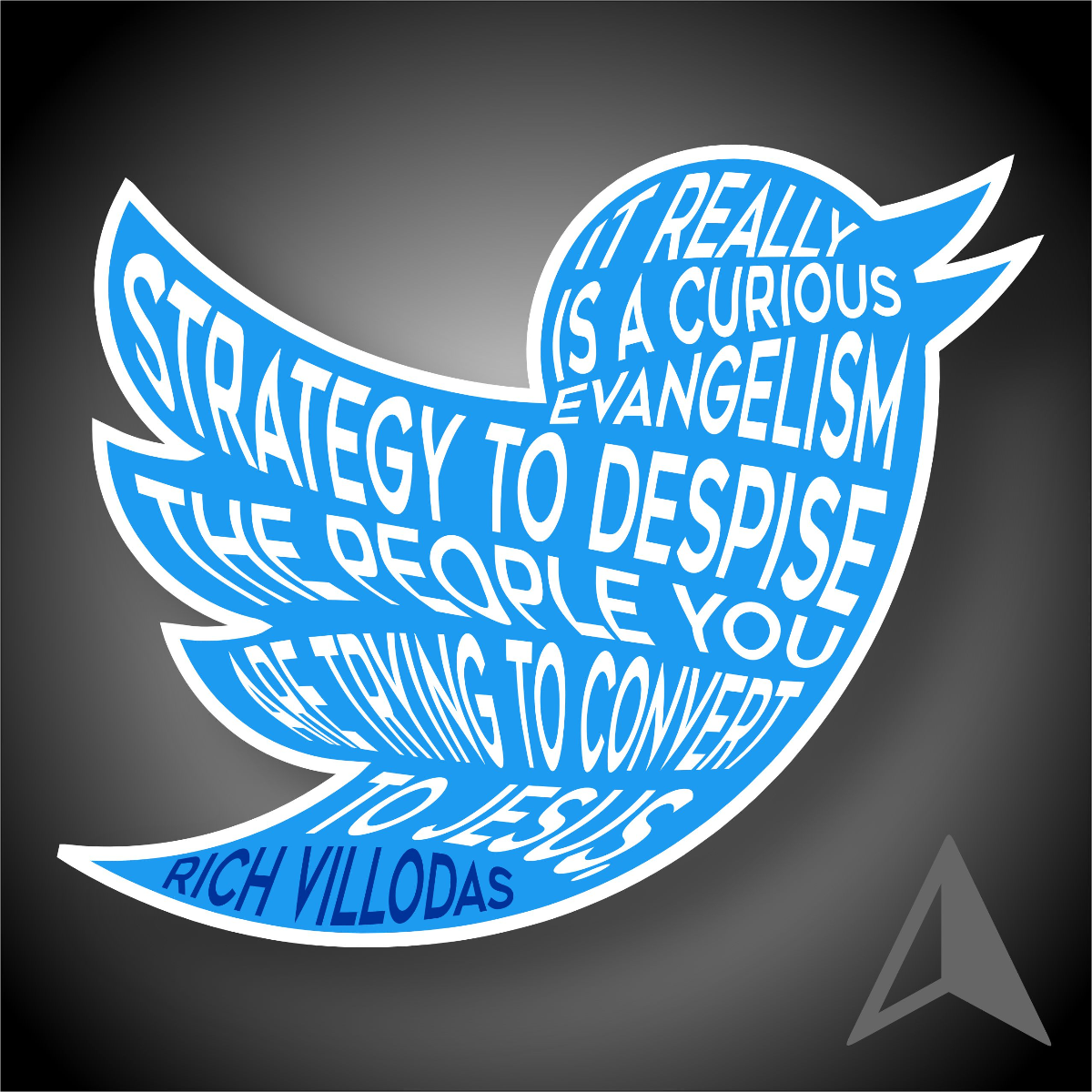 “It really is a
curious evangelism strategy
to despise the people
you are trying
to convert to Jesus.”
—Rich Villodas

What is the most pressing Issue of today that is pressing upon you? You are opinionated about this Issue, aren’t you? You have thoughts; you have rationale. You probably know the chief spokesperson(s) for your Issue—the players, the one with soundbites and authority, and a blog trail as wide as 16 lanes of the 405. You can spot a friendly supporter of your Issue. The rest are probably enemies or waffling cowards, no?

How would you describe it when there is a win or gain for your Issue? Is there mocking, derision, gloating? Flamethrower GIFs from a superior altitudinous position?

How would you describe your feelings when the Issue’s opposition is winning, spreading, conquering? Are there imaginations of assassinations, grotesque premature deaths?

Why so much murder inside that chest ticker of yours?

An exercise: Write a few sentences to a person holding an opposite view on the Issue, especially considering all the recent developments and shifts with said Issue. Please attempt to be concise. Make it tweetable.  Set aside.

Open up Galatians 5 and let your eyes scan verses twenty-two through twenty-four. Allow your chest ticker to absorb the Spirit’s fruit. Take a bite out of that kindness plum. Doesn’t that taste better than that time you got flipped off in the Costco parking lot? Pick up your finely crafted Issue tweet. Compare it to the Spirit’s fruit. Do they have a similar taste and fragrance? Drop the one that seems rotten. Don’t drop the one that seems like naïve, ineffective weaksauce. Why? Because it’s delicious, silly.

Dear one who belongs to Christ, if there is dissimilarity between the two, would you refrain from posting on any social media/comment section/blog/vlog/text chain/Discord channel platform until your chest ticker starts to pulse a rhythmic tone like this:

but God shows his love for us in this way:
while we were still sinners— enemies, really,
Christ died for us.

Again, Villodas: “Maybe the (un)conscious strategy at work is not to convert them to Jesus, but to ourselves.”

The problem, of course, is that we don’t accept the part where we get totally murdered online, or anywhere else. If there is murdering to be done, we prefer to hold the knife while recruiting others to join our knife-wielding Band of the Issue Protectorate. Which is incredibly dissimilar to a Saviour whose entire ministry of reconciliation is inaugurated through allowing all the murder to descend upon Himself.

You only have two hands. You cannot hold all three: the Issue, the Fruit, the knife. Pick only two. Might I suggest the self-control peaches—always juicy, always in season.