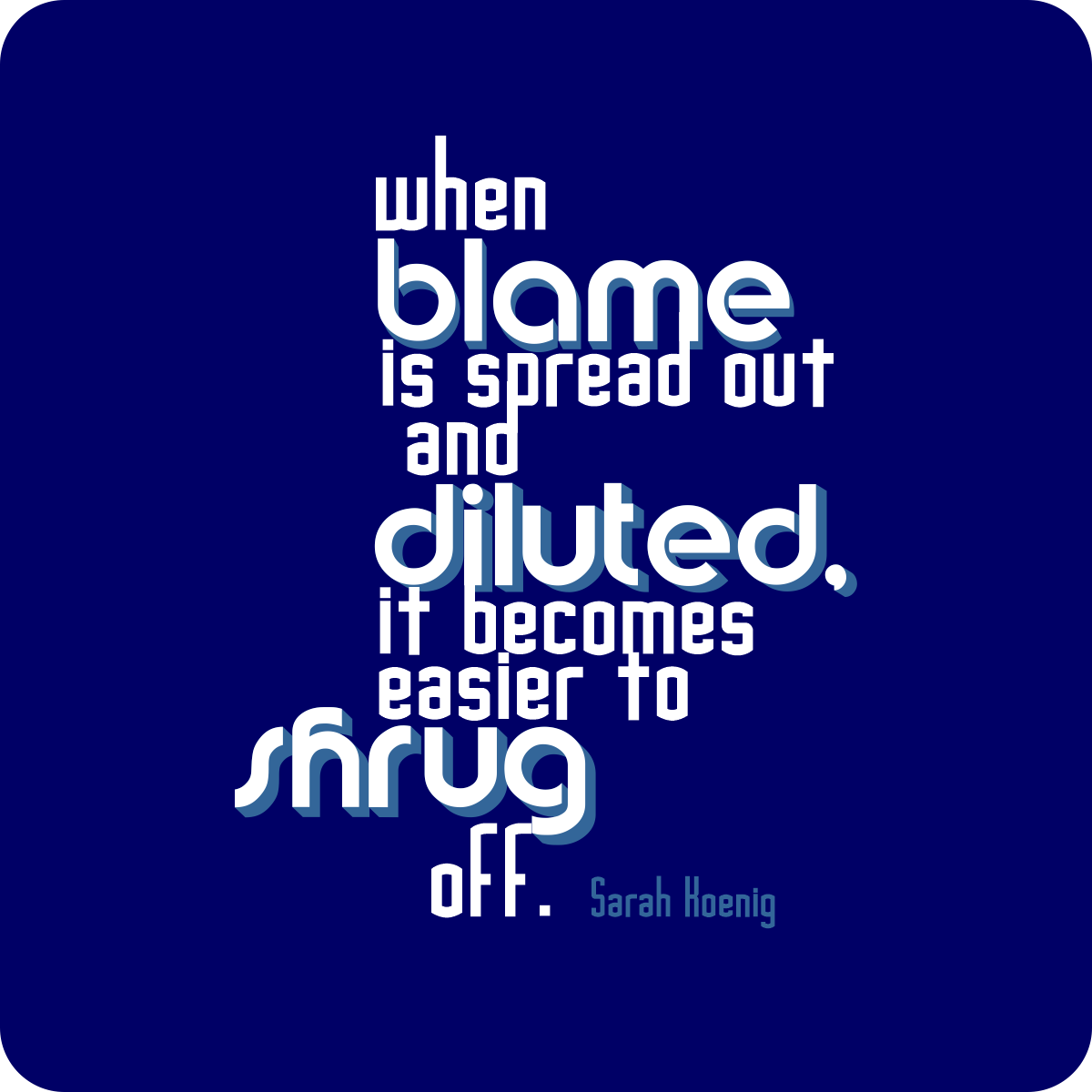 This last year—more than any other in my short pilgrimage on Earth, mind you—I have encountered a fixed certitude in people who know—with resolute adamancy—where the Problems Are, Who the Problem Is. What is wrong with the world these days? Oh, let me just tell you, they’ll begin with no real prospect for ending.

There is a disgusted vitriol with almost every conversation about substantial matters. He mad. She mad. We mad. They crazy. They dumb. The Other is a messing up all of life. If the Other wasn’t so stupid, everything would be soooo much better. Can the ignorant Other get any more ignorant-er? It seems they can.

While listening to a recent podcast on our criminal justice system, there was a moment when the narrator identified a real problem—a reasonable, definite contributor to the broken-ness. And then quickly— showing journalistic breadth and nuance—she recognized that this particular problem was only a small piece in the astoundingly vast landscape of other pieces that were also broken. Was it right to pin all of the broken-ness on only one piece? She said it this way:

“When no one feels fully responsible for the outcome, when blame is spread out and diluted, a situation like Da'von's becomes easier to shrug off. What are you going to do, starts to feel like an answer, rather than an urgent question.” (Serial, Season 3, Episode 5, “Pleas, Baby Pleas”)

That first bit stuck with me. Dilution of blame begins to feel much like innocence. And felt innocence perceives all Others as guilty.

One of my reference companions is The Worship Sourcebook (Steenwyk, Witvliet). Bestseller it is not, but it describes what entails biblical confession. Listen in:

“a full prayer of confession acknowledges that our sin is more than an isolated example of bad judgment. We are sinful people, and we live in need of a Savior. Our confession also acknowledges that sin infects not just persons but also societies, institutions, and all of creation. Along with the confession of personal sins, we confess our participation in the structures and institutions in which evil persists.”

That last line is a doozy. My (Our) confession describes a participation in an astoundingly vast landscape of structures and institutions—things I probably don’t see. Christians don’t hide behind any dilution of blame. Start here, we say, you can blame me first. We stand to take blame. We don’t shrug it off. We nod to our blind assistance to the broken things staying broken and hurting the most vulnerable. We agree that we have been accomplices. We don’t begin with an assumption of anti-racism. We assume we are racist and commence to discovering how so.

Now, why would we do that?

Because we transfer it. We unload it immediately.  That’s the confidence of the Christian. Sure, I’ll confess. Ima bout to hand that over to the Lamb.

Years ago, The Times (London) sent out a brief inquiry to various literati: “What’s wrong with the world today?” The piece wanted to identify problems (and solutions) from the pinnacle of Western thought and creativity.  Critic G.K. Chesterton sent this letter to its editor:

Dear Sir,
I am.
Yours,
G.K. Chesterton

There is a song that I love—but in a closeted, sheepish kind of way. You see, I’m conflicted about this song. Those who grew up in the southern church experience will get what I’m saying. “Just As I Am.” There, I said it. In a southern worship service, that song is the go-to FINAL Song. The aisle walker. The musical equivalent of sealing the spiritual deal. There are 6 official stanzas. But including interlude, piano solos, additional crooning, and repetition of certain phrases, this standard could stand toe-to-toe with a bootleg jam session of Widespread Panic or Phish. 14 minutes of pure soul massaging, until some poor sap just wants the service to be over and finally ambles down the center. Just stop the song already.

But those lyrics, though.

Just as I am, without one plea,
but that thy blood was shed for me

Here I am with nary an excuse. It’s incredibly difficult to find any Other more repugnant than my own underarm. The only Other is the one who is blameless. And He is my(our) Friend.