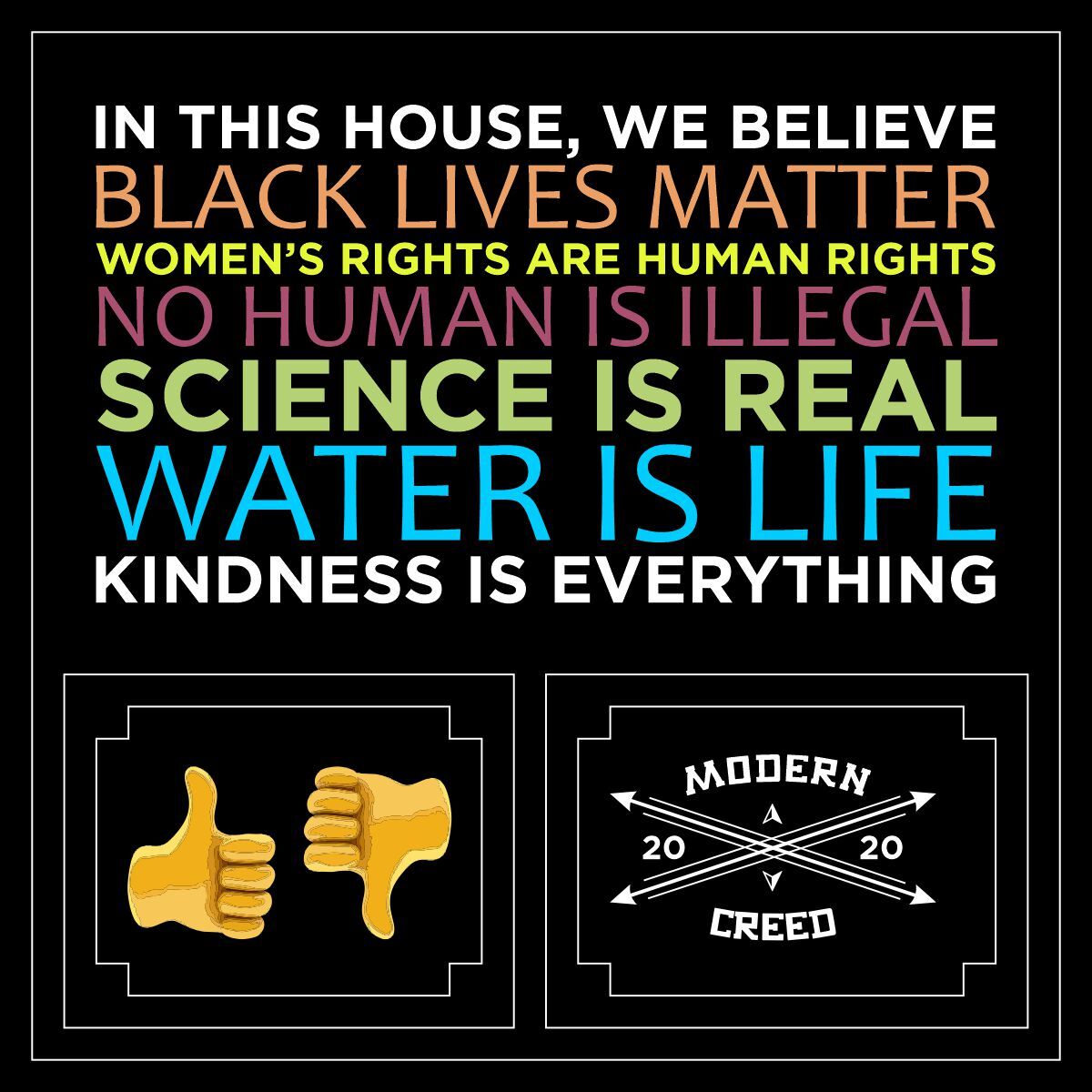 While out for my morning jog, I’ve seen a growing number of IN-THIS-HOUSE-WE-BELIEVE yard signs pop up. There are small variations, but most of them overlap. They strike me as bold, public creeds—letting the world know what its residents value.

Historically, Jesus people have always had creeds like those yard signs—short little statements that encapsulate larger matters.  The dustiest of those creeds starts off in familiar unison: “I believe in God the Father Almighty, creator of heaven and earth...” (Apostle’s, not to be confused with Apollo).
‍

But here we are with a modern creed. And I don’t mean Scott Stapp, either. What shall we make of it?

Now if I know politicized conservative American Christianity, then I know those yard signs make some Christians twitch:

And if I know politicized liberal American Christianity, then I know that seeing a conservative twitch is just as fun as watching Karens behaving badly on your favorite news aggregator. I also know that low-cost, no-sweat, yard-sign activism is an appealing exercise for displaying one’s wokeness. In its worst form, the yard-sign communicates high-level, self-justifying superiority: “We, in this house, are not the problem. Blame some other houses.” <turns and stares hard at conservative church people>  It feels good to be noble and point fingers at the same time. And many liberal-leaning Christians assume mom and dad’s traditional Christianity does not value what these yard-signs posit:

Pastor, why is the church silent about these issues? Why doesn’t the church care about the environment?

Why does the Church not care for the protection, provision, and respect of the entire LGBTQ+ community? Why does the church hate women and insist on their misogynistic, paternalistic, hegemonic hierarchies and power dynamics? Why are faith and science enemies in the Church? Why are the majority of Caucasian American evangelicals supportive of systemic racist policies? Why is our theology so distant from our civil and social engagement, pastor?!

Oddly enough, I think both camps can benefit from the same instruction. Both types of Christians are forgetful of God’s plan for His creation.

Let’s take one of those statements: Water is Life. As with the other statements, it is a small phrase that captures a much larger issue. Depending on your cause of choice, this phrase advocates clean drinking water for developing countries and/or advocacy for proper oceanic caretaking.

The conservative Christian is often associated with America First! sentiments, meaning that developing countries might have to wait in the queue awhile before we tackle drinking water problems in a meaningful way. Or, if oceanic care means that a conservative Christian may have to reduce their use of single-use plastics, then a common conservative rebuttal might begin with touting inalienable, personal plastic rights. (Or mask-less rights?) And since the issue falls squarely under the category of Environmentalism, the conservative may reject any helpful solutions based on political alignment alone.

Perhaps, this is the strange situation we find ourselves in when political ideologies become primary drivers of personal conviction. Creation care did not originate in the mind of Alexandria Ocasio-Cortez. Creation care is an edict from Eden. Stewardship of the earth and its resources is not a liberal agenda. It is the agenda of God. He called His creation good. And then He called man to cultivate and care for it. Should we continue to use the ocean for both a toilet and a pantry? Does that sound right to you? When God called Israel to himself as his “chosen people,” it wasn’t so that they could hog all the blessings to themselves.  He said: I have called you to be a priest to the nations. I bless you, so that you will bless the nations. Like Somalia, with drinking-water problems. Have you forgotten that liberals are not your enemy?  They are not lib-tards, crazy, or bleeding-heart morons. They are beautiful, intelligent, God-wrought, God-bought image-bearers who long for rightness, justice. Dear conservative Christian, have you forgotten this? Have you forgotten that image-bearers of God do not get priority based on nationality or country of origin? Or political party? Have you forgotten this?

But don’t get too smug, liberal-leaning Christian. It’s your turn, now.

Do you think your tears and intentions will heal God’s world? Do you think couch-surfing Twitter re-posting counts as real activism? Do you think your Black friends now trust you because you posted a black square? Do you think saying “Black Lives Matters” counts as reparations? It doesn’t. What if activisms look like developing long-term real friendships with the friendless and vulnerable? What if activism centers first on what you should sacrifice, not what other people and governments should sacrifice? Did Jesus say He came to bring peace or a peace protest? (John Updike) Do you think you are the wokest of all the woke? Do you not know that your future grand-children will denounce your current wokeness as completely backwards?  Creation care did not originate in the mind of Alexandria Ocasio-Cortez. You are not the first to care about environmental concerns. Do not have chronological forgetfulness.  The modern Church is wayward, yes, but it was the original fount for redemptive work in creation...at deep self-cost. The Western ethic for other-facing care was derived from Judeo-Christianity, not humanistic rationalism. And what will ultimately heal the world? Will it be your activism or will it be Jesus making “all the sad things come untrue”(J.R.R. Tolkien) at the End of Days? Where is your hope for ultimate fixes? You have given far too much power to Mr. Trump.  Does he hold the keys to heaven or hell? Dear liberal-leaning Christian, I love your God-hunger for the bad things to be abolished; I love your eager entry into all the struggles that fight back evil and its far-reaching effects. Have you forgotten that mankind will not be the catalyst for our re-entry into Eden? We will never remake New Eden until Christ himself remakes it. Do not forget that activism without Jesus will send the world to hells upon hells.

I care for both of you. No, really. I know it smarts, but that feeling will go away soon.

My new friend Scott Phillips created a similar-sized creed.  No biting parody. No sarcasm. No fighting the other side. No finger pointing. Personal culpability. And hope. Good enough, big enough for all of us.

In this house, we believe:

We are all responsible

Graves will be empty

Life is coming because of Jesus

All the sad things will become untrue.