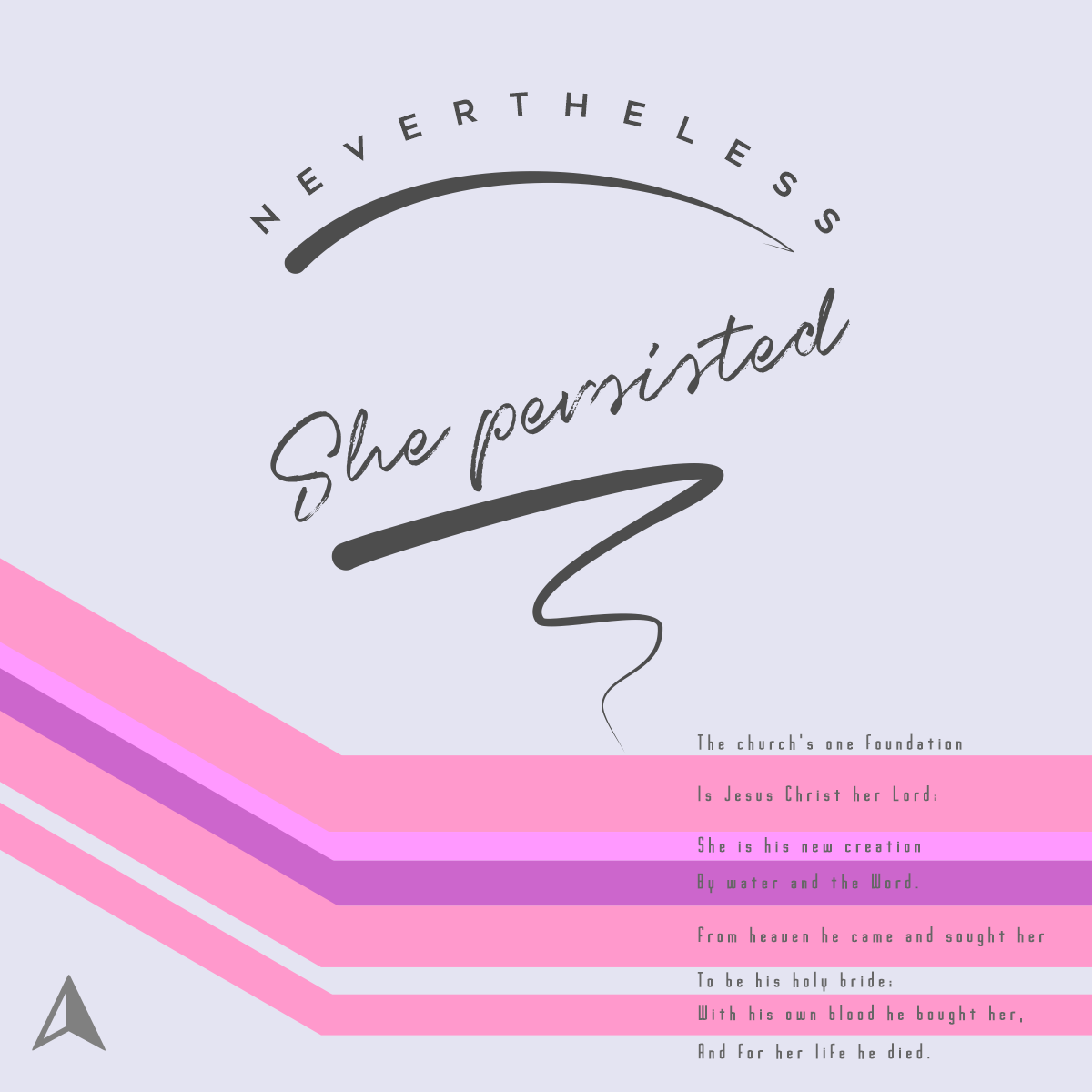 Can you keep a secret? Shhh, don’t tell my oldest daughter, but I’m designing a custom t-shirt for a graduation gift. It will be swirling hand-drawn type, cohesively intertwining with other elements, stating, “Nevertheless She Persisted.” Not available in pink, because she doesn’t like it that girls are herded to pink products—much like the BIC for Her Retractable Pen Set. It’s exactly like other BIC pens, but in pink and gentle lavender. Also marked up 20%. You can imagine her disdain. You should read the amazon customer reviews.

“Nevertheless she persisted” comes from way back in 2017, when Senator Elizabeth Warren refused to stop talking during the confirmation hearing of Senator Jeff Sessions for Attorney General. The Senate voted for her to stop talking. After the vote, Senator Mitch McConnell scolded her in the press with a withering, “Nevertheless she persisted.” Unwittingly, McConnell inspired a generation of women with a handy slogan that fits perfectly on a graphic tee. It certainly outlasted the Attorney General; it will outlast McConnell.

There is another She that just won’t quit.  She doesn’t stop. She doesn’t disappear, even when she is annoying, unpopular, and dismissed. She’s been around awhile. She refuses to leave. She’s going to outlast, too. People try to vote her down, quiet her influence, and herd her into a gentle lavender corner—defanged of any real power. Nevertheless she persist(s)ed. The Scriptures call her the Bride. I call her the Church.

But why does She not go away? Seriously, when it looks like Americans are leaving the institutional church in droves, when the church looks silly, hostile, outdated, irrelevant, stodgy— how does she not just die already?

In the latest issue of The Atlantic (May 2022), Jonathan Haidt wrote a fascinating article (“After Babel: How Social Media Dissolved the Mortar of Society and Made America Stupid”* that deserves greater attention in a setting full of vigorous discussion, cigars, night drinks, and those little tempura fried shrimp thingys with lemongrass cilantro glaze. His thesis, combined with a daylight heist of biblical ideas, is that a) societies unify around important commonalities and b) are fragmented (especially now) by the inability to communicate, condemned to “mutual incomprehension.” Haidt concedes that “the story of Babel is the best metaphor I have found for what happened to America in the 2010s…”

His focus was not on the state of the American Church [though Haidt, a non-Christian, recently appeared on Russell Moore’s podcast, Moore to the Point], but there was a sentence that caught my attention as it relates to the exceptional persistence of The Bride:

True, the Church would not often be accused of being a “successful democracy,” but for the sake of thought-experiments, let’s read that broadly as “successful, self-perpetuating ongoing communities comprised of voluntary, free-thinking members.” Or something like that.

Why do people keep coming back to the Church after swearing her off? What can She offer in the ruins of Babel, and mutual incomprehension? Why does she persist?

Using Haidt’s lens of social science, it may seem obvious, but let’s state it out loud:

1) Social Capital (extensive networks with high levels of trust)
Translating the jargon of the academy, that simply means an interdependent community that cares for the interest of others (of course, alongside self-interest). This is never truer than in a highly diverse, global metropolitan city. There is rarely geographical superiority because most people are always from somewhere else. And yet, for a smattering of reasons, they could not import the traditional safety nets—extended family, access to financial markets, established property heritage, etc. In short, they are alone in the big city. Communities—even micro-communities—begin to matter. A friend who can watch your kids while you finish up a project isn’t just a favor, it’s a job-saver. A friend who cooks you a meal when you get unexpectedly sick isn’t just a gesture of syrupy sweet Southern hospitality, it’s real mental health amidst the compounding anxiety. When you have a friend who knows a guy who will fix your brakes without a side of gouge, means you are able to pay for the shoes and the lessons. Churches who warmly absorb the immigrant, outsider, lonely, thorny, hurting, and fragmented ever-so-gradually develop social capital—for others, themselves.

2) Strong Institutions
By definition, an institution is something that is not novel or faddish. It spans multiple generations that may very well be vastly differentiated in opinion, strategy, and living philosophy. These institutions give stability, a recognizable commonality between disparate groups. Despite any personal revulsion, McDonalds is an American institution. Your grandparents and grandchildren both will most likely eat a Big Mac. Baseball, DisneyWorld, etc., but no longer Kmart, Sears, and JCPenney. Although expressed differently in tone, verbiage, and cultural cues, the traditions of the church are not the dusty, outmoded creaks of irrelevance. They are the skeletal spine of something that has persevered through every sort of tragedy and intellectual shift imaginable. A new theological stance is immediately suspect— not for its lack of sophistication and citation— but for it’s untested-ness against every other century’s malignancies and intellectual gymnastics. The data is real: the expressions of Jesus’s church that have veered from basic orthodoxy have contracted. Churches who maintain crucial, fundamental belief systems shared with dead Christians across the centuries are expanding. Or persisting. The body appreciates its spine by not collapsing.

3) Shared Stories
When divided people are mutually incomprehensible to each other, stories become isolated or unknown—bouncing around self-curated, self-affirming ecosystems (social media). It’s why my family has separate Spotify accounts—we don’t want anyone messing with our personal “algos” (algorithms). Or confusingly, shared stories/events, are interpreted in radically different ways, rendering the story useless for common values, inspiration, or ethics. Though you may think the church a tad repetitive at this particular point, it is remarkably consistent and persistent about the main part of the story: “Hey, guess what? Jesus loves you and He died for your sins.” How many times have you heard that? The part of about the dying Jesus? The part about the all the naughty sins (done and left undone) deserving damnation and such? The part about forgiveness? That shared story has a power. That shared story has a taste—communion. It unifies fragmented people more than you know.

Why do people keep coming back to the Church after swearing her off?

In the ruins of Babel, she persists by providing the most basic symbol of meaning, a Cross. The community gathered around that symbol are equal sinners and equal be-knighted siblings due quite the inheritance. That community spans decades, centuries. And we have the stories. And, funnily enough, it’s far more democratic than you imagine:

“We will have the dead at our councils.
The ancient Greeks voted by stones; these shall vote by tombstones.
It is all quite regular and official, for most tombstones,
like most ballot papers, are marked with a cross.”

* My wife is currently tucking into The Coddling of the American Mind (Greg Lukianoff & Jonathan Haidt), and is searching for a group of anyone who wants to discuss it this summer.