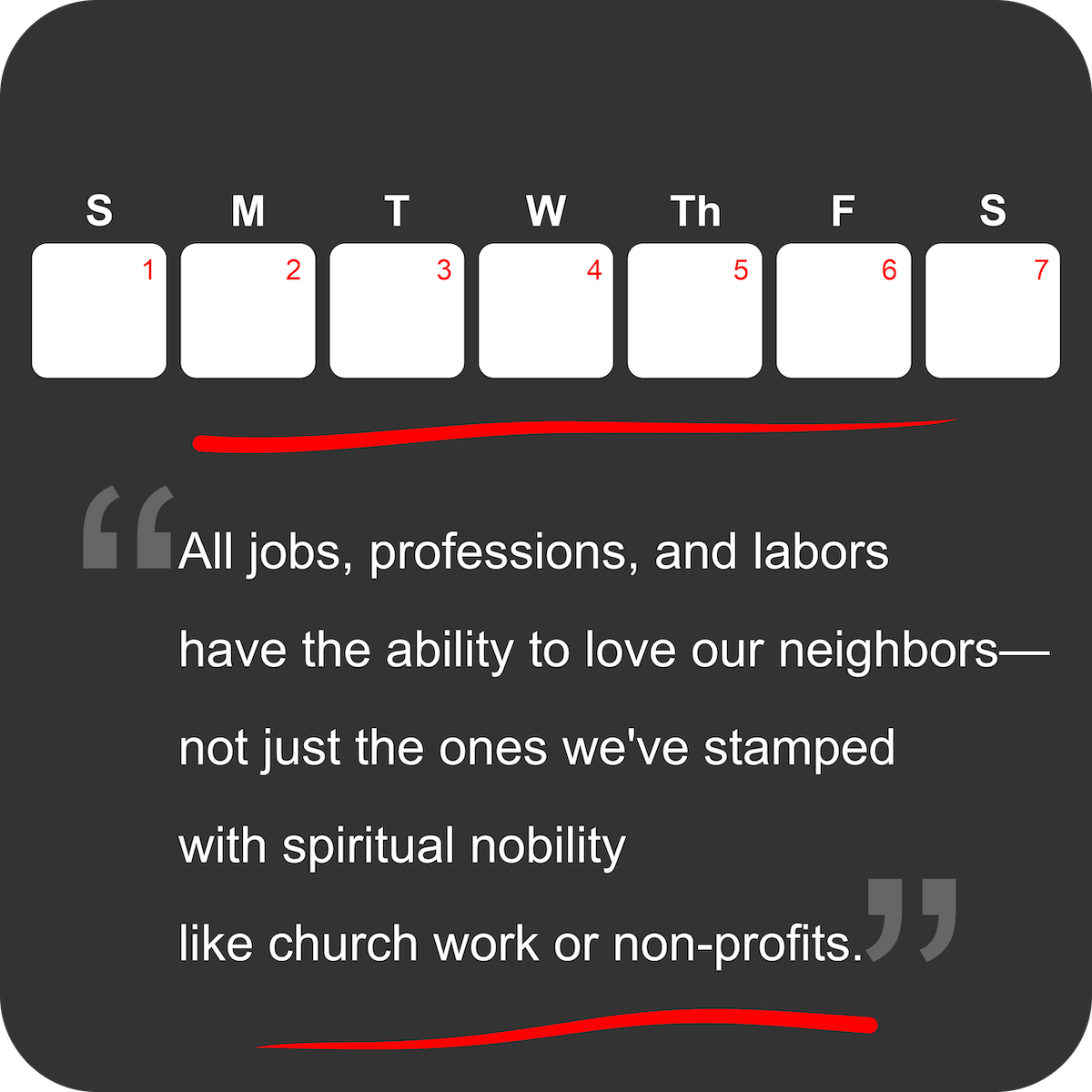 Twenty years ago, Jerram Barrs (author: Echoes of Eden, The Heart of Evangelism) once posed a question to me: “Would you rather eat the best hamburger in the city cooked by an atheist, or an OK hamburger cooked by a Christian?”
If he intended an ethical quandary, I felt none. I had no dilemma, no struggle.
“I want the best burger,” I said.
"Me, too,” he said. “Good work is a spiritual event.”
I’m not so sure I caught his full meaning back then, but I nodded anyway.

For many Christians, their spiritual work comprises of what they do on the weekends attached to their church’s programs. Dorothy Sayers put it this way: “The church’s approach to an intelligent carpenter is usually confined to exhorting him to not be drunk and disorderly in his leisure hours and to come to church on Sundays. What the church should be telling him is this: that the very first demand that his religion makes upon him is that he should make good tables.”

Five percent of our lives (weekend warriors for God) is imagined to be “spiritual” while our employment and tasks during the week wouldn’t often be considered a prayerful act of worship, obedience, and image-bearing reflection.

To illustrate this, William Diehl, author of The Monday Connection, tells the story of Captain David Cronin—an airline pilot. After taking off from Honolulu en route to New Zealand, his 747 suffered a massive breach in the cargo bay and quickly pulled 9 passengers to their deaths. Two engines were immediately rendered useless by flying debris. He was 22,000 feet in the air and one hundred miles from land. Diehl describes what Cronin was able to do using his abilities and extensive experience:

To compensate for the lack of thrust from the two right engines, he struggled to hold the control column steady with his hands while using his           feet to put pressure on the control floor rudder to stabilize the plane. His stickiest problem, however, was deciding how fast to fly. [He] slowed           the plane as close to stall speed as possible to keep the air rushing over the plane from further widening the whole in the fuselage. Because           the hole had changed the aero-dynamics of the huge craft, the usual data regarding stall speed was no longer relevant.

The pilot [knowing this] had to use his best judgment. Furthermore, since the plane had just taken on 300,000 pounds of fuel for the long           flight, it was too heavy to land without collapsing the landing gear.

…Then he encountered a new problem. The wing flaps used to slow down the plane were not working properly. …He would have to land the           plane at 195 miles per hour, compared to the normal speed of 170 miles per hour. The jet weighed 610,000 pounds, well above Boeing’s           recommended maximum stress load of 564,000 pounds. Nevertheless, Captain Cronin made one of the smoothest landings the rest of the           crew could remember, amid the cheers of the passengers. Airline experts called the landing miraculous.

…A few days after the harrowing experience, an interviewer asked Captain Cronin about his first thoughts following the loss of the cargo door.           He said, “I said a prayer for my passengers momentarily and then got back to business.”

When United Airlines Flight 811 got into trouble, the greatest gift Captain Cronin had for his passengers was his experience and good           judgment. In those moments of peril, it mattered not to the passengers how Captain Cronin related to his coworkers or how he communicated           his faith to others. …The critical issue was this: was he competent enough as a pilot to bring that badly damaged plane in safely. …Through our           work we can touch God in a variety of ways…but if the call of the Christian is to participate in God’s ongoing creative process, the bedrock of           our ministry has to be competency. We must use our talents in as competent a manner as possible.

Competency is a basic value. It is not a means to some other end, such as wealth or position, although such results may occur.‍

All jobs, professions, and labors have the ability to love our neighbors—not just the ones we’ve stamped with spiritual nobility like church work or non-profits. So make good spreadsheets. Write clear, compelling memos. Wipe down that section behind the faucet. Make good cheeseburgers, and let me have one.